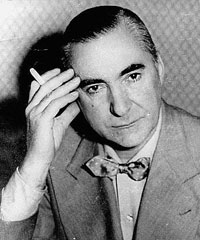 Curzio Malaparte (; 9 June 1898 – 19 July 1957), born Kurt Erich Suckert, was an Italian writer, filmmaker, war correspondent and diplomat. Malaparte is best known outside Italy due to his works ''Kaputt'' (1944) and ''La pelle'' (1949). The former is a semi-fictionalised account of the Eastern Front during the Second World War and the latter is an account focusing on morality in the immediate post-war period of Naples (it was placed on the ''Index Librorum Prohibitorum'').

During the 1920s, Malaparte was one of the intellectuals who supported the rise of Italian fascism and Benito Mussolini, through the magazine ''900''. Despite this, Malaparte had a complex relationship with the National Fascist Party and was stripped of membership in 1933 for his independent streak. Arrested numerous times, he had Casa Malaparte created in Capri where he lived under house arrest. After the Second World War, he became a filmmaker and moved closer to both Togliatti's Italian Communist Party and the Catholic Church (though once a staunch atheist), reputedly becoming a member of both before his death. Provided by Wikipedia
Showing 1 - 1 of 1 for search: 'Malaparte, Curzio, 1898-1957', query time: 0.01s
List  Tabulka
Search Tools: Get RSS Feed — Email this Search —
Loading...